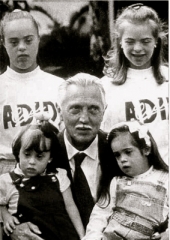 This exhibition deals with the human being and his destiny by proposing a research on “human nature:” starting from the testimony of Jérôme Lejeune, founder of clinical genetics, through the developments of this discipline and the more recent advances in evolutionary biology on genetic determinism.
The exhibit is divided into three parts:

The man Lejeune and the foundation of clinical genetics.
His scientific training is retraced within the context of the biomedical knowledge of his time and some basic notions are introduced (hereditary illness, chromosomes, genes, DNA …). Then, his scientific activity is described, as well as his approach to research, and his discoveries: in particular, how he was able to demonstrate in 1958 the connection between the Down syndrome and trisomy 21. Lejeune is a researcher but also a doctor, in particular he is a pediatrician: his position, and thus the purpose of his scientific research, is to know in order to cure; and to cure means to take care of the person. Some examples are introduced that describe how the genetic research has made it possible to treat some hereditary syndromes and, starting form Lejeune’s witness, how important it is for the sick person to be within a human context, even in cases where there is no progress. The exhibition highlights the foundations on which Lejeune bases his view of man, which are at the origin of his strong public pro-life stances: for Lejeune each man is “unique” and “irreplaceable” and as such he must be guarded.

The developments of clinical genetics.
From Lejeune’s discoveries, genetics has made great progress. Nowadays we know most of the human genes and his entire DNA sequence; therefore, it is possible to identify the genetic bases of several diseases. But this is not all. With today’s technologies and with relatively little money, we can obtain the entire DNA sequence of several single individuals. What for? Which information can we gain from it? Someone says that we will be able to anticipate if a person is a carrier of a genetic disease, if he is predisposed to degenerative diseases (diabetes, atherosclerosis, etc.); and if he will have a good disposition, if he will be intelligent or, for example, if he will be a great pianist. But, most of all, is this knowledge a means to better cure, as Lejeune stated, or is it used to select (eugenics)?

Is our destiny written in our genes?
The exhibition reviews the idea, however widespread, that there is “one gene for” each characteristic (it often happens to read: “discovered the gene for altruism, the gene for aggressiveness, the gene for intelligence, etc.”); this is the idea according to which the human being, and in general any living organism, is the sum of many “genes for.” The modern evolutionary biology tells us that the genetic makeup is not so much an “executive program” but rather the sum of “tools” used by the biological organism, together with several other information sources, to build its own life. Therefore, it is rather difficult to think about the living beings, and most of all the human being, as beings totally determined and dependent by genes. And here appears the image, so dear to Lejeune, of the irreducible uniqueness of man and of the contingency of any living being: we might have not been here, and yet we are here; and this gaze on reality cannot be anything else than a continuous and inexhaustible source of surprise and question. This mystery remains incomprehensible until it takes up the name of “father;” as Lejeune was “father” for his patients. Only the father is able to recognize uniqueness, and he can do so when he discovers that he himself is a son.