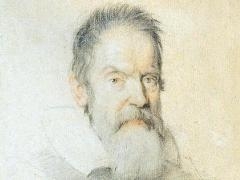 On the occasion of the fourth centennial anniversary of Galileo’s first observations through his telescope, we chose a vertiginous human experience as topic: that which is proper of those who saw marvelous things that no other man saw before. This exhibition describes the events regarding Galileo, his ingenious intuitions, his human relationships,his profound reasons, starting from the astronomical observations collected in the little book Sidereus Nuncius; a seventeenth-century copy of the book is placed in the middle of the exhibition. The purpose is to help to identify with that moment of discovery, with what Galileo has actually seen during those unforgettable nights, and the intent is to better understand its inevitable consequences.

Galileo is a symbol of the complexity of this age. The exhibition starts exactly by describing the difficult historical and cultural context of the beginning of the Seventeenth Century. The unitary concept of life and of knowledge has totally disappeared, and new approaches to study man and nature are imposing themselves with all their ambiguities and presumptions, which will result in modernity. Moreover, we can’t ignore the significance of the big inheritance received by Galileo from the previous centuries: the value of reason, the order of the natural phenomena, the ability to understand nature, all elements that would converge into the scientific investigation, a new way of knowing reality, both limited and powerful.

Images, original documents, and copies highlight this precious background. With the help of models, videos, and the recreation of the historical period, the visitor’s eyes are immediately captured by Galileo’s scientific and technological activities during the years that he spent in Padua; the background is a lively cosmological debate regarding “the two chief world systems” which can’t be simply seen as a confrontation between the Ptolemaic and Copernican positions.

Then, the decisive event: the news about the new tool, the telescope, the frenzied attempts to make it perfect, and the fabulous adventure of the “magic nights” between December 1609 and March 1610. The visitor finds himself in front of the celestial bodies in a way very similar to how Galileo saw them; and he can observe how great Galileo was in interpreting them, describing them, and also in drawing them. It is a turning point in Galileo’s life; it is the beginning of a new phase of his human and cultural journey, not alien to a certain claim to impose his own perspective.

After 1609, Galileo’s life is characterized by the numerous polemical reactions, but also by the positive ones, such as those of the Jesuits from the Roman College, and those of the missionaries who would bring those new ideas all the way to China.

From various original letters and documents displayed in the exhibition, his effort to defend the primacy he had conquered is evident, up to participating in disputes and arguments. The greatest problem is finding evidences supporting the Copernican model; Galileo doesn’t have them and the search for them would occupy the following centuries, as it is clearly explained through models and outlines reproducing the most significant results. This multi-step journey opens up wider questions that are connected to science nowadays: this is the ambit of Benedict XVI’s references to Galileo, as beforehand John Paul II’s ones; and in the wake of John Paul II’s historical statement in 1982 and through the words of two scientists at the apex of contemporary astrophysics, the exhibition closes presenting again the theme of the relationships between science and the other methods of knowledge.