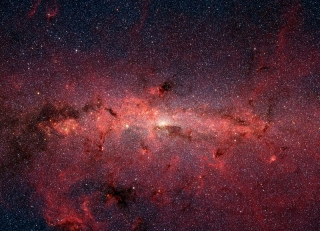 The arch of light which forms the Milky Way, and which stretches across the sky is a spectacle that has filled all generations with wonder, from prehistory to today. Ancient civilizations from all over the world, from the Egyptians to the Chinese, from the Aborigines to the Incas, have built myths and legends around this ineffable heavenly sight. Even throughout the history of Europe many poets and painters have taken inspiration from its hazy and silvery light. Modern science has revealed the physical nature of the Milky Way, by recognizing in it the diffuse glow of the Galaxy in which we are immersed: a spiral structure which contains hundreds of thousands of stars, so vast that a ray of light takes a thousand centuries to cross it. Science has also shown us how the structure of the Milky Way, its evolution, movement, and composition, just like our position in it, all have a decisive motion for the formation and maintenance of our planet and, in the final analysis, for making our existence possible. Even the most turbulent and extraordinary phenomena of the Milky Way, such as the central large black hole, the explosions of supernovae or the halo of dark matter that surrounds it, have somehow contributed to create the favorable environment in which we live. What used to appear as a mysterious luminous trail, today is revealed to be a complex structure, characterized by an order and an evolution that modern science has made comprehensible for us, at least in part. However the purpose of scientific knowledge is certainly not to suffocate the original sense of mystery and wonder which the sensitivity of the ancients felt instinctively, and which the genius of the artist can express in an immediate way. Instead, science has widened out of all proportion our awareness of the vastness and beauty of the Milky Way. Science has also revealed to us that its connection with our existence is much deeper than any far-out pre-scientific vision had dared to imagine. “A che tante facelle?, “…Why so many lights?”: Leopardi’s question, in the light of modern science, becomes ever deeper, more urgent and inevitable. This exhibition helps visitors to view our Galaxy as the “great outskirts” of our earthly environment through high-definition spectacular images of the Milky Way recently obtained from the Hubble Space Telescope and the biggest telescopes on Earth. Films and various multimedia tools may also be used. Items on display will include reproductions of works of art inspired by the Milky Way, as well as historic documents (among them the first few observations of Galileo) and original instruments that have gradually revealed the physical nature of our Galaxy. At the center of the exhibition there will be a planetarium, 6m in diameter, to reproduce a view of the Milky Way and the starry sky. Finally, the Milky Way will be shown to be one of the innumerable galaxies in the universe: even our galaxy, which seems to be so vast, becomes the size of a dot when viewed in cosmic space in its entirety.