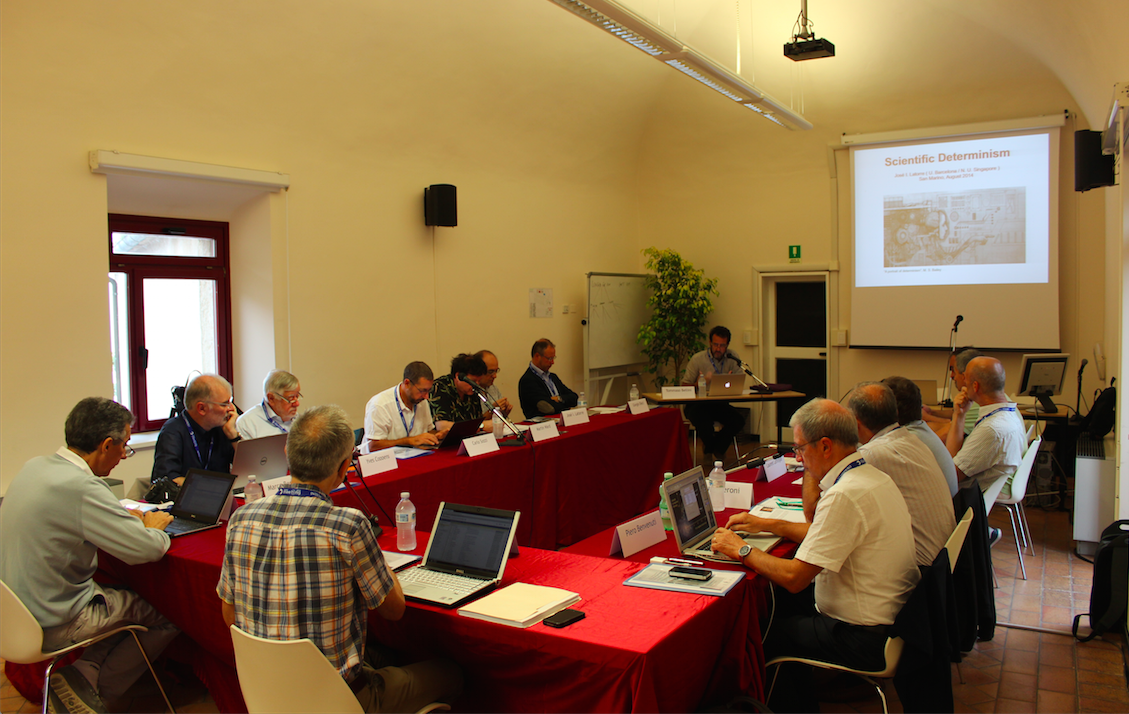 Samir Suweis, Il Sussidiario, 2 settembre 2014
What are the “big questions” in the various fields of science today?  What lays at the heart of the interest in these questions?  What is their cultural impact?  And most of all, what moves the scientist in his or her quest?  These fundamental questions should be the daily bread for those who, like myself, have made science their trade.  And yet, seized by the eagerness of “doing” and “publishing,” we often run the risk of taking these questions for granted, to the point of forgetting the spark which made us decide, at one point, to risk everything in the adventure of scientific research.

In contrast, all these questions were at the core of the International Symposium “The roots of motivation in science and knowledge,” organized last week in San Marino by Euresis, in partnership with the Rimini Meeting, the CEUR foundation, the University of San Marino, and the Republic of San Marino.  Here, distinguished scientists from various fields – from physics to anthropology and from mathematics to neurosciences – have “compared notes” starting from their own specific scientific experience, and by doing so have opened a true interdisciplinary dialogue.  This dialogue is rarely found at purely technical scientific seminars, for these inevitably focus on the work of a particular specialized field.

This well-established symposium (this is the eighth year) in San Marino is born instead of the intuition that the content and method of scientific knowledge are profoundly related to the human subjects carrying them out. The symposium, therefore, proposes itself as the attempt to take note of a unity emerging at the origin of each individual scientific discipline, as it seeks to take a step further in the knowledge of reality.  This article is not the place to compile a complete summary of the contents of the Symposium (you may refer for this to the upcoming issue of Euresis Journal [www.euresisjournal.org]), but rather I will summarize here some of the fundamental passages which were laid out in these days, and which have also identified new issues, as well as re-introduced other questions.

“The opportunity of comprehending the Universe is the reason why being born is better than not existing at all.”  This quote by Anaxagoras – brought to our attention by Marco Bersanelli, president of the Euresis scientific committee, during the final discussion at the Symposium – is a good summary of that spark, raised during the many presentations, which pushes one to explore and to comprehend the ever-new frontiers of knowledge.  Certainly the content of the “big questions” in science, today as back then, have to do with the origin, the evolution, and the destiny of the Universe, of Earth, of life, and of human beings.  Age-old questions such as “what is life?,” or “are we alone in the Universe?,” or “is the Universe comprehensible through some fundamental principles?” remain, as a matter of fact, the issues spurring researchers of various disciplines in their scientific adventure even today.

As presented by two distinguished astrophysicists, namely Dan Moez (Tel-Aviv University) and Christopher Impey (University of Arizona), the many recent discoveries made available by the “Kepler” mission have suddenly made us aware of the existence of thousands of extra-solar planets (“exoplanets”) and planetary systems with diverse properties, some of which might potentially be similar to the properties of the Earth and of our solar system.  The analysis needed to comprehend which of these may theoretically be of a suitable size and temperature to host life has only recently begun, and yet we are certainly going through a new “Copernican extension”: not only we are not at the center of our solar system, but our planetary system may share properties in common with many other systems in the universe.

It is equally clear, though, that these discoveries do not quench – rather they feed – the questions that urge us to understand what makes this planet our home, and why  our own Earth has been able to host life, and what is the “mystery of our being.”  And so, the mystery of the “I” has been tackled from another angle in the presentation by Yves Coppens, world-renowned anthropologist and paleontologist, who emphasized the importance of time in order for life on Earth to emerge.  While going briefly over the history of our planet from its formation to the appearance of human beings, Coppens noted how the history of the universe constantly did – and does – involve the production of matter and of objects, whereas the transformation from non-living matter to organic living matter is an “important discontinuity within said continuity.”

A further crucial and mysterious step is the appearance of self-awareness in human beings.  While on one side archeology and paleontology can identify the cultural phenomena in ancient times which are signs of the existence of an “I” who is aware, on the other side it is still utopian to think that we can have a scientific understanding of the nature of self-awareness.  As Professor Mauro Ceroni (University of Pavia) remarked, it is fundamental for science to be aware of its own limits, and to take seriously the evidence of human experience.  Professor Ceroni explained that “neurosciences often tend to think that awareness is a mere epiphenomenon physically determined by neural activity, thus disregarding the unity of the ‘I’.”  Instead, in Wittgenstein’s words, “we think that even if all the possible scientific questions were to be answered, the issues about the mystery of our life would not be resolved.” (Ludwig Wittgenstein, Tractatus Logico-Philosophicus).

On this topic, an interesting discussion opened up.  Professor Jose Latorre, a physicist of the University of Barcelona and Singapore, noted how it is premature today for neurosciences to tackle questions such as the nature of self-awareness, though he added that the complexity of certain questions shouldn’t make us afraid, because only this way we will be able to take real steps forward in the near future.  Everyone agreed, ultimately, that the journey of research is inexhaustible, even though human beings have an ever-increasing capacity to manipulate their own human nature; in this sense, scientists – and in fact the entire society – are called to a greater responsibility and ability to discern.

Another topic that emerged as a driver of science and knowledge is certainly our desire for beauty, order and symmetry, which pushes us further in our research into fundamental physical and mathematical laws that comprehend reality and the complexity of what surrounds us.

Professor Amos Maritan (University of Padua) elaborated on how physics today has begun to seek fundamental principles and processes which drive the emerging behavior of complex biological systems.  This adventure is just at the beginning, but precisely for this reason it is also very fascinating: “Our role in biology is similar to Ptolemy’s in astronomy before the discovery of the principles of dynamics.  We are attempting to use relatively simple and elegant models in order to comprehend data which describes the macroscopic behavior of biological systems.  This approach is reasonable, since the collective behavior of living systems does not depend on the forces acting on a microscopic level, just the same way as we don’t need to know quarks physics in order to understand how a molecule works.”

Professor Latorre then discussed the relationship among the laws of physics, determinism, and randomness, showing that many crucial points – such as the role of the “observers” in Quantum Mechanics – are still open points, but cautioning that the link sometimes suggested between human freedom and quantum mechanics is at this point just philosophical speculation without scientific foundation.  Then, Professor Laurent Lafforge, professor of mathematics at the University of Paris and winner of the Fields Medal in 2002, addressed the relationship between mathematics and freedom:  “Is there freedom in mathematics?”  In his extremely rich and profound presentation, Professor Lafforgue showed how freedom is at play in mathematics in the aspect of the willingness to accept and to follow through with the great sacrifices required by research, of obedience to the facts (the numbers), and of accepting a relationship with a mathematical community (“the mathematician needs a tradition and a community, to compare oneself with”).

I’d like to conclude with a thought by Plato about the activity of the real “truth seeker,” a quote pointed out by Professor Piero Benvenuti at the conclusion of the Symposium, which describes well the two days spent in San Marino.  In his Letter VII (year 344 BC), Plato says: “After total dedication and after a long time, striving with difficulty to put in touch these realities – that is, names, definitions, observations and other empiric data – and comparing them deeply with each other, and testing them in serene comparisons and in discussions free from envy and from hidden purposes by men who proceed from questions to answers, eventually with a sudden spark the understanding of some problem shines through, and the intuition of the intellect appears, for those who make the greatest effort possible to humans.”  That’s the hidden spark which has the power to move Science.